Why aren't all nuclear plants running at their full installed power to decrease emissions?

Looking at the electricity map I can see that many countries operating nuclear power plants are not running them at their full installed power, e.g.:

Meanwhile, countries like Denmark are running coal and biomass power plants and exporting power with a relatively high carbon footprint to Sweden:

And France itself is still running gas power plants:

What is the reason for this? Would not it make sense to ramp up the nuclear power to lower the emissions?

TL;dr -- it's most economical to operate nuclear plants at a fixed output level, so other fuels are used to adjust for variations in demand. Nuclear output at any given time is limited by outages, which are driven by the need for refueling and routine maintenance.

Nuclear plants aren't load following, so other sources are needed

Load following is the potential for a power plant to adjust its power output as demand and price for electricity fluctuates throughout the day. In nuclear power plants, this is done by inserting control rods into the reactor pressure vessel. This operation is very inefficient as nuclear power generation is composed almost entirely of fixed and sunk costs; therefore, lowering the power output doesn't significantly reduce generating costs. Moreover, the plant is thermo-mechanically stressed. Older nuclear (and coal) power plants may take many hours, if not days, to achieve a steady state power output.

Basically, it costs money to reduce output from a nuclear plant (you're still paying salaries, maintenance, etc, while no revenue is being generated), and it takes a long time change the output.

In the case of fuel-burning plants (coal and natural gas), your costs are reduced when generation is reduced, so it makes sense to operate these in load-following mode.

You can see this in the hourly generation data from the U.S. Energy Information Agency: 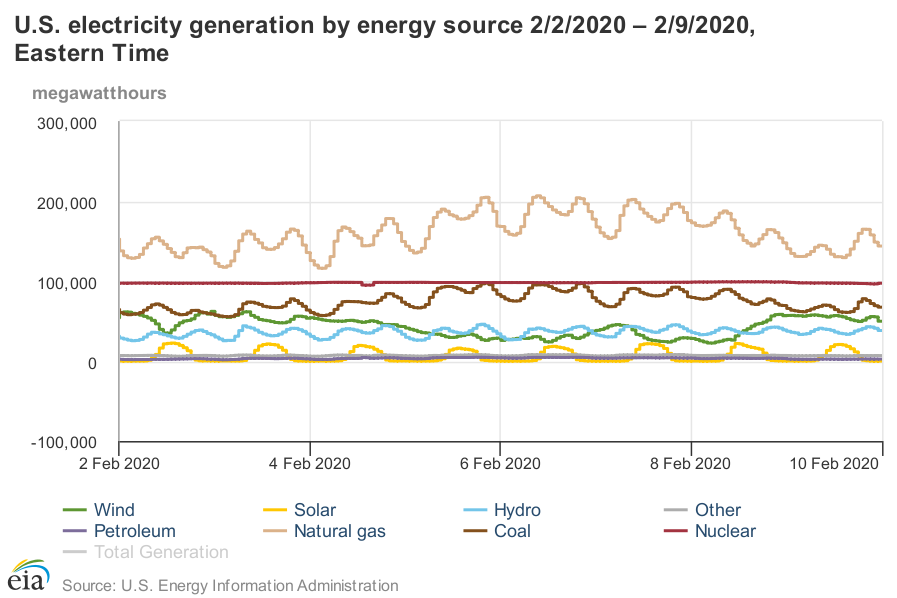 Nuclear is a flat line, natural gas swings wildly with two peaks a day, and coal strikes a balance between the two.

As a result, electrical systems need other power sources besides nuclear to meet fluctuating power demand -- even when nuclear is operating at 100%, the system is designed such that other sources will be required to meet all demand.

Nuclear plant availability -- why aren't they running at 100%?

Availability defines how much of the time the reactor is capable of providing power, and is a function of scheduled maintenance, refueling, and repair needs. According to the International Atomic Energy Agency's (IAEA) report on Nuclear power plant outage optimisation strategy, outages are scheduled with refuelling, and fall into one of four categories:

Most of the utilities regard a 12 month fuel cycle as economically optimum. Some utilities have lengthened the fuel cycle up to 18 or 24 months. [...]

In the medium and long term planning, it has become a good practice to categorize the outages in three or four types with the objective to minimize the total outage time. The outages may be categorized into four different kinds:

The IAEA provides statistics on lifetime availability by country. Here are statistics as of 2018 for the countries in the question, plus a few others for context:

A commenter pointed out that in France, some nuclear power plants are operated in load following mode (source: OECD Nuclear Energy Agency). From the ENTSOE transparency platform, here's generation data for the same week in France (the charting tool is limited, so I downloaded the data and made my own plot): 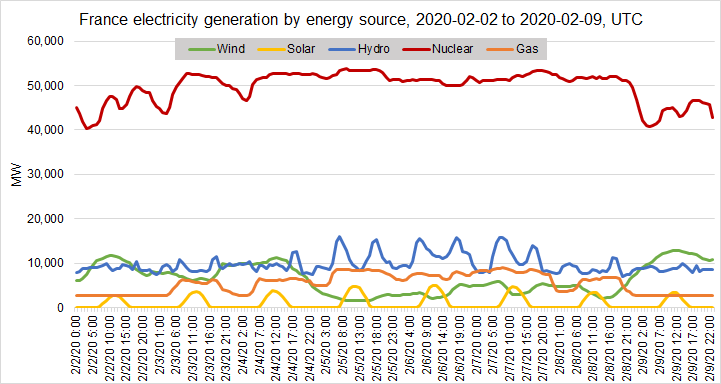 It also appears that gas generation is being used to back wind, which would make sense given the variability of wind and the ability of modern gas-burning plants to ramp quickly.

Here are some stats from the data on how nuclear and gas plants have operated so far this year:

The World Nuclear Organization profile page on France gives some context to these numbers (as of October 2019):

France's nuclear reactors comprise 90% of EdF's [Électricité de France, the government-owned utility] capacity and hence are used in load-following mode [...] and are even sometimes closed over weekends, so their capacity factor is low by world standards, at 77.3%. However, availability is almost 84% and increasing.

It is because government regulations limit the power output of the reactors. There are various regulations such as verifying reliability of a new unit. I remember following the gradual permitted increase in power from the Zion unit north of Chicago when it was new. Nukes are generally used for base line power , that is they are run constantly at whatever power the government will allow. Gas turbines are the first choice for peak load power as they start fast and there are usually several so they can be brought on-line one at a time as needed.

Not the answer you're looking for? Browse other questions tagged electricity-generation natural-gas coal nuclear or ask your own question.

7
What has been the greenhouse gas impact of shutting down Japanese nuclear power plants post-Fukushima?