Is driving an electric car any better than driving a conventional car if electricity is generated with fossil fuel?

Is driving an electric car any better, GHG-wise, than driving a conventional car if 100% of its electricity is generated by fossil fuel combustion? Are there any peer-reviewed studies of that?

The fossil fuel of choice in electricity generation today is natural gas.

Natural gas combined cycle turbines run at 50% efficiency. Compare that to the 25% average efficiency of a car internal combustion engine (sure you can read information about 38% record efficiency but that's only at a particular operating point, not average over a general drive cycle). Natural gas is actually a very efficient hydrogen container: a particular amount of natural gas contains twice as much hydrogen as the same amount of hydrogen gas. Thus, a very significant fraction of the energy in natural gas is actually zero-emission hydrogen. Therefore, natural gas produces only 200 g / kWh of primary energy. At 50% efficiency, that's 400 g / kWh of electricity.

An largish electric car consumes about 0.18 kWh / km so that gives 72 g / km. With internal combustion engine cars, emissions are usually at least twice that even in the smallest engines, and an engine that gives good acceleration has very high emissions (compare that to electric cars that by default have very fast acceleration). Also, the stated emissions of fossil fuel cars are the tailpipe emissions. If oil refining emissions are taken into account too, the emissions easily increase 30% over the stated emissions and can be as high as 250 g / km taking into account refining for a comparable gasoline car having good acceleration. Natural gas is a nice fuel in that it requires absolutely no refining at all.

In contrast, an internal combustion engine in a car is a mobile power source. There's no practical way to capture the carbon dioxide as it's a gas and takes far more space than the liquid fuel from which it was produced. Thus, the only option is to release the carbon dioxide back to atmosphere.

Also it is noteworthy that practically no one is planning to use natural gas as baseload far into the future. Solar power and especially wind power are very good candidates for producing the bulk of electricity, and their fuels being free allow very cheap production, far cheaper than natural gas. Natural gas turbines have very good adjustment properties, meaning you can for example very easily produce power from 85% renewables and 15% natural gas, even given the intermittency of renewables. You just over-size the renewables a bit and use the spare electricity for example for producing green hydrogen or charging large iron-air batteries. Even without carbon capture, this 85%/15% mix would give 10.8 g / km average emissions. However, carbon capture is very likely and this gives 0 g / km average emissions.

A typical car extracts about 25% of the available energy from gasoline, representing about 60% of Carnot efficiency for the car's operating temperature.

A coal-fired power plant extracts about 45% of the available energy from the coal, representing 90% or more of Carnot efficiency. It can use techniques such as multiple-expansion turbines, preheaters, and re-heaters that are too heavy or too bulky to fit into a car. Even after you factor in transmission losses and the relative carbon emissions of coal versus gasoline, an electric car charged from a coal power plant produces lower emissions than a gasoline car.

(There are other advantages to an electric car that can boost its advantage even higher, such as regenerative braking, but the increased efficiency of turning heat to useful energy is the big one.)

Volvo have done an interesting study on this recently, looking at whole-lifecycle emissions for a BEV (battery electric vehicle) XC40 versus a ICE (internal combusion engine) XC40. A vehicle life-cycle of 200,000km is assumed.

In summary, the lifetime emissions are as follows:

For info, production emissions of the BEV were 70% higher than that of the ICE version. Of course, this could vary substantially between vehicles and manufacturers.

Renewable diesel is a Co2 neutral product that is a direct replacement for hydrocarbon diesel in the diesel fleet. https://www.eia.gov/energyexplained/biofuels/biodiesel-in-depth.php

This fuel is available today, I run it in my Audi Q5 TDI and get better mileage (about 2 mpg). Switching to this fuel also give us a more diverse infrastructure and better economic independence from scarce minerals like lithium and cobalt.

We also need to look at the pollution hazards of disposing of batteries after their 4-6 years of usable life. Co2 is not the only issue in the cleaner equation. So I'll have to say no electric cars are not necessarily cleaner than conventional cars.

The GHG intensity of battery-electric vehicles (BEVs) charged from a fossil-fuel based electrical grid is a moot point (a fact that doesn't matter because it's not relevant to the current situation) in the context of global decarbonization and here's why: There is no realistic pathway for deep decarbonization of combustion engine vehicles. 1

The only realistic pathway to decarbonizing transportation is a combined effort at both vehicle electrification and transitioning the electrical grid to low-carbon energy sources (ie. renewables). 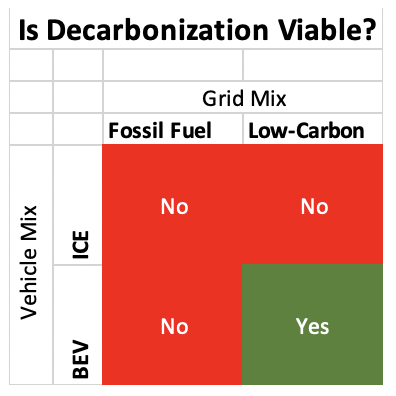 It just doesn't make sense to ask about a hypothetical scenario where 100% of electricity is generated by fossil fuel combustion because that's not a reality in any country today, and most countries are transitioning their electrical grids to lower-carbon energy sources.

Down in their assumptions they improve the numbers by saying that there could also be 650GW of European onshore wind-power in the year 2050. I suppose that I previously used 650GW as the total of all European wind-power. However, these are their visionary numbers.

No, since building a new electric car has already so much Carbon impact on the planet compared to an old existing conventional car that its lifetime Carbon impact can only be balanced through the use of renewable sources of electricity.

The best approach is:

I don't believe driving an electric car is more fuel efficiency than for example a modern diesel (which is around 41% fuel efficient more if they made hybrid or better heat recovery). Especially when you consider the losses between the power station, charging the batteries and then driving the car.

However, it is easier to modify power station to deal with the pollutions (e.g. capture and storage) or using greener tech like nuclear, solar, wind, tidal than it is to modify a car to deal with it.

Col36Col36
1
Add a comment  |
Highly active question. Earn 10 reputation (not counting the association bonus) in order to answer this question. The reputation requirement helps protect this question from spam and non-answer activity.

Not the answer you're looking for? Browse other questions tagged transport greenhouse-gas-emissions climate-change or ask your own question.

35
Are electric cars as environmentally friendly as we think they are?

1
Mindset change in developing countries
4
How much increase in GHG emissions is caused by Amazon Prime?
3
To what extent do CO2 emissions from motor vehicles vary?
6
How does the climate impact of an LNG-powered cruise ship compare to flying?
7
How much of a reduction of carbon emissions can be achieved if a diesel bus is switched out for electric?
4
Which countries, regions, or cities have set a date to ban the sale of gasoline and diesel vehicles?
3
How much additional CO2 emissions will result from recent changes to US vehicle regulations?
2
What is the climate impact of discarding natural apparel in landfills?
5
Electricity need to switch all cars from fossil fuel
2
Is crop production a net source or a net sink of carbon emissions?