Why not use condensate from a split-unit air conditioner to improve cooling efficiency?

This is bugging me to the point that it almost enrages me.

A split-unit air conditioner would typically cause condensate to form in the indoor unit. This water can be simply drained with gravity having a pipe running to a sewer.

However in most cases there is no nearby sewerage pipe or the installation would be too much of a hassle. Usually the water is pumped all the way back to the outdoor unit (because there are already pipes going through walls that way) where it is just dumped on the roof, in a gutter or elsewhere (sometimes even causing problems)...

I don't get it... the manufacturers are not oblivion to the cooling power of evaporating liquid (the whole AC device works on that principle) so why don't they add a contraption to sprinkle the radiator with the condensed water (like dripping it onto a slanted surface for instance)? The radiator is already weather proof since it should be able to handle rain and snow blowing in and it would also get wet with condensation when working in reverse (heating) mode. Condensed water will not build up calcium or lime scales as opposed to tap water (unless one suffers from severe indoor dust storms). 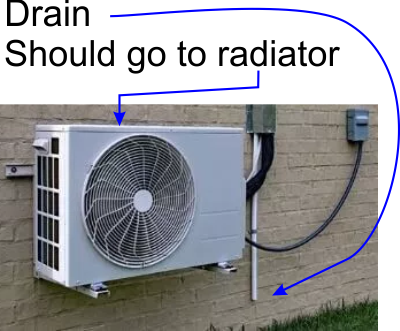 Corrosion of the radiator may be a concern, but when used in reverse as a heat-pump, the radiator would be wet any way (in the wetter parts of the year when not freezing) water will condensate on the outside radiator. That is a reason why the radiator should not be designed in a way that it would hold water in order to evaporate it. When used in reverse as a heat-pump it would be ideal to let that water run off before having a chance to evaporate. In this mode there will be no water coming from the drain so it would not interfere.

Here's a schematic illustration of a most simple implementation: 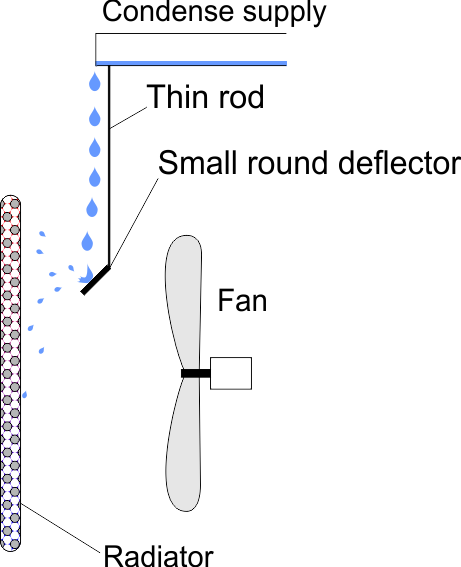 The rate at which condense is supplied may be greater than what can be evaporated this way (between 5 and 20 gallons a day).

An active way to evaporate the water in a controlled way is to run the hot gas trough a flattened pipe that is cooled by sandwiched Peltier elements that bring the water up to boiling point and dramatically cool the gas with a comparatively small amount of energy (using Peltier elements without the evaporating water would not be efficient at all, but boiling water should extract a huge amount of heat).

Here's a rough illustration of the idea: 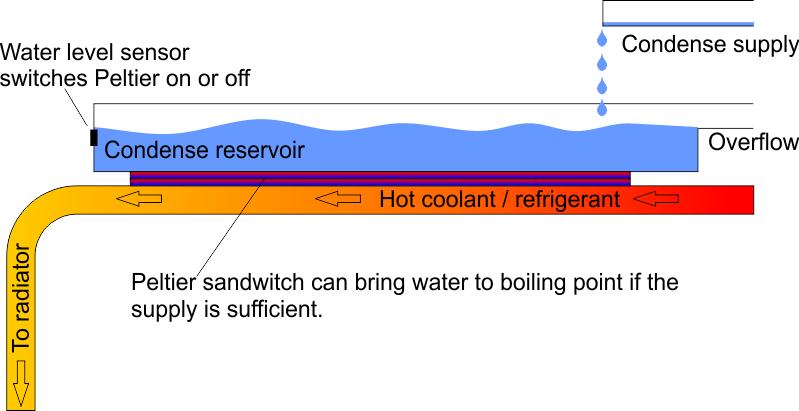 I cannot find much info about how hot the refrigerant is at the start of the radiator, but I think a TEC2-19004 should be able to get it to boil. It can handle 4 Amps at 16 Volts so that would be 64Watt max to get a difference of ≥80°C according to their claims. Running at max capacity is not most efficient but should not be needed, we don't want the refrigerant to freeze in the radiator either...

However we may need a few of these to consume all the water. The water will not start to boil until the whole body of water has reached boiling point. Without a hot radiator it takes about 2400kW to evaporate 2.4 liters per hour in an even more wasteful evaporation pan. In this use-case a Peltier solution could be allot more efficient than most of the other inefficient ways that Peltier solutions are usually known for.

The way condensate currently just gets dumped right under the radiator baffles me, this idea seems so obvious, I cannot believe that I'm the first to come up with it. So my question is why doesn't any AC unit on the market have a built-in option to use drained condensate for cooling by re-evaporation?

Yes, indeed, all AC units have condensing water on the evaporator. One way to get rid of it is simply a pipe where it is discarded to a sewer or discarded outdoors.

I suspect the reason why split AC units don't do the same is caused by these:

So the expense of a pump or two and the inconvenience of draining the container if water doesn't evaporate fast enough isn't probably worth it.

It's true that the temperature at the condenser is critical to AC system efficiency. There are two ways it can be improved:

The manufacturers probably have though that if condensed water can be gotten easily and cheaply rid of by dripping it to the ground, the expense of potentially two pumps and the inconvenience of getting rid of the too fast accumulating water in some climates isn't worth it to slightly improve the system efficiency, because the manufacturer can improve system efficiency by making the fan rotate a bit faster, or to install a better (larger) fan.

The self-contained AC units on wheels that can't get rid of water via a pipe because the entire unit is contained indoors and hot air is blown out of a window using a duct, do evaporating not because it greatly improves system efficiency (it improves efficiency only slightly), but rather because that's the only option they have. They have to have a pump and means of shutting down the device when water accumulates too much (to let the user solve the situation).

Also I wouldn't be surprised to find out if the evaporation of water in self-contained AC units only works because they're so terribly inefficient in cooling the hot condenser (they do it via a duct). Split AC units have a very very large fan at the condenser. Spit AC units are also more efficient. I suspect the very very large fan can do a far better job at cooling the condenser, improving system efficiency. I'm not sure if the well-cooled condenser is hot enough to actually evaporate the water. If not, then it's not actually true that evaporation of water improves system efficiency. To evaporate, you need hot enough condenser and that alone may mean the system efficiency has to be low.

I considered a water drip on my outside condenser but the possibility of corrosion was likely to more than offset any efficiency gain. Yes, the outside unit gets rained on occasionally but that is not the same as usually wet.

4
How can I more effectively cool my house by managing windows with outdoor temperature changes?
9
Why do similar buildings use different types of cooling methods and which one is more environment friendly?
5
Need critique of my idea for a passive heating and cooling system for a tent/waterbed
7
Temperature equalisation throughout the house
2
Most energy-efficient way to keep my pipes from freezing without tearing up walls/floor?
1
Why is the Energy Guide efficiency rating of my air conditioner so much lower than the specification?
1
Reuse waste heat from air conditioning