How difficult is it to build your own dry, self-composting toilet?

I live in the country and have space on the north-side of my house where it doesn't get too hot in the summer. I think this could be a good place to implant a water-less or dry toilet.

I would like to avoid using electricity for drying. I'm thinking of doing it myself, but I'm not sure where to start.

What do you think of this project? I'm looking for experience feedback here. How much could this cost? How much time should I plan for it to make it run and compost fine?

I've lived in a house with a DIY composting toilet, and we've since purchased one that's Australian certified(called EcoFlo) to be the toilet in the house. It looks prettier, but it seems to work the same way as the DIY one (but it has the magic paperwork that makes the government happy). I've only done this in urban areas (minimum 200m² of garden space on a 400-600m² block of land).

The DIY one was literally just some buckets and a frame to hold a toilet seat over the current bucket. We kept it outside so it got solar heating during the day and the small stink didn't matter (we also had chickens, which is a slightly different but generally stronger smell). We followed the Humanure Handbook, more or less, using straw and sawdust mulch that we purchased as bulking agent/cellulose. With sawdust you have to be sure it's not too fresh, or a species where the sawdust has antimicrobial properties (in Australia that includes all eucalypt species and many other native trees and shrubs).

What we found with the DIY one was that having a tight lid so we could shake the bucket up a couple of times a week helped distribute the poo and fill better, and it composted faster. But leaving the lid slightly ajar worked better to make it actually compost (a vent would work, or as we used, two lids). With the EcoFlo I ended up with a "shit stick" to stir the pot a couple of times a week and help distribute the poo, because their setup has vent pipes and drains in the chamber. I'm not convinced that that is the best arrangement, but it makes for a very pretty, self-contained unit.

Having external heat seems to be essential. Putting our EcoFlo commercial one in a small, cold toilet room seemed to stop it composting properly and we got vinegar flies and bad smells. Shifting it outside and putting it in the sun stopped the smell very quickly (one day) and the flies died off after a couple of days. Other brands have electric heaters which I expect do the same thing, but I would be tempted to make a passive thermosyphon solar setup if I was making a DIY one and had a two storey house (we hope to build a two storey, ~60m² flat in the back yard with a double garage underneath, so that plan will probably work for me).

The EcoFlo one has seals under the toilet seat and lid, so when the lid is down it forms a reasonable seal, and the fan built in to the vent pipe means that smells get sucked out the vent (and exhaust up on the roof where they disperse). The DIY one was outside.

Finally, the compost takes quite a while, in Australia they say at least 3 months sitting outside in the sun but preferably 6 months. With 4 containers (about 40-50 litres) two of us took about 3 months to fill one, so we possibly only need 3, but it's better to have extra if it's your only toilet :)

Also, urine is separate. With the DIY one we just peed on the garden, but that requires a bit of privacy and healthy people. Since we had a flush toilet inside we used that, and some housemates never used the outside toilet. The EcoFlo one has a urine catch basin built in that you have to connect to hoses that take the pee outside, and you need to dig a pit and fill it with gravel to absorb the pee. In the new house with the EcoFlo, our soil is clay and does not drain well, so that wouldn't have worked. Instead I dug a larger pit than suggested, and filled it with woodchip mulch, then put soil over the top (proper soil, not clay). The pee makes the woodchips rot quite fast, so after 3 months there was a visible dip over the trench and well broken down woodchips underneath. I re-buried those in the garden and put more in. But I don't mind digging, and we have a lot of cheap woodchips available. I'm sure there are other ways to do this.

I am about to start the project. Here are the charges I plan:

In my view it should take about 1 hour / month to handle the manure. I also account to about 5-10 hours per year for total cleaning.

Now I know what it takes

I moved on on the project, and changed my mind a little: 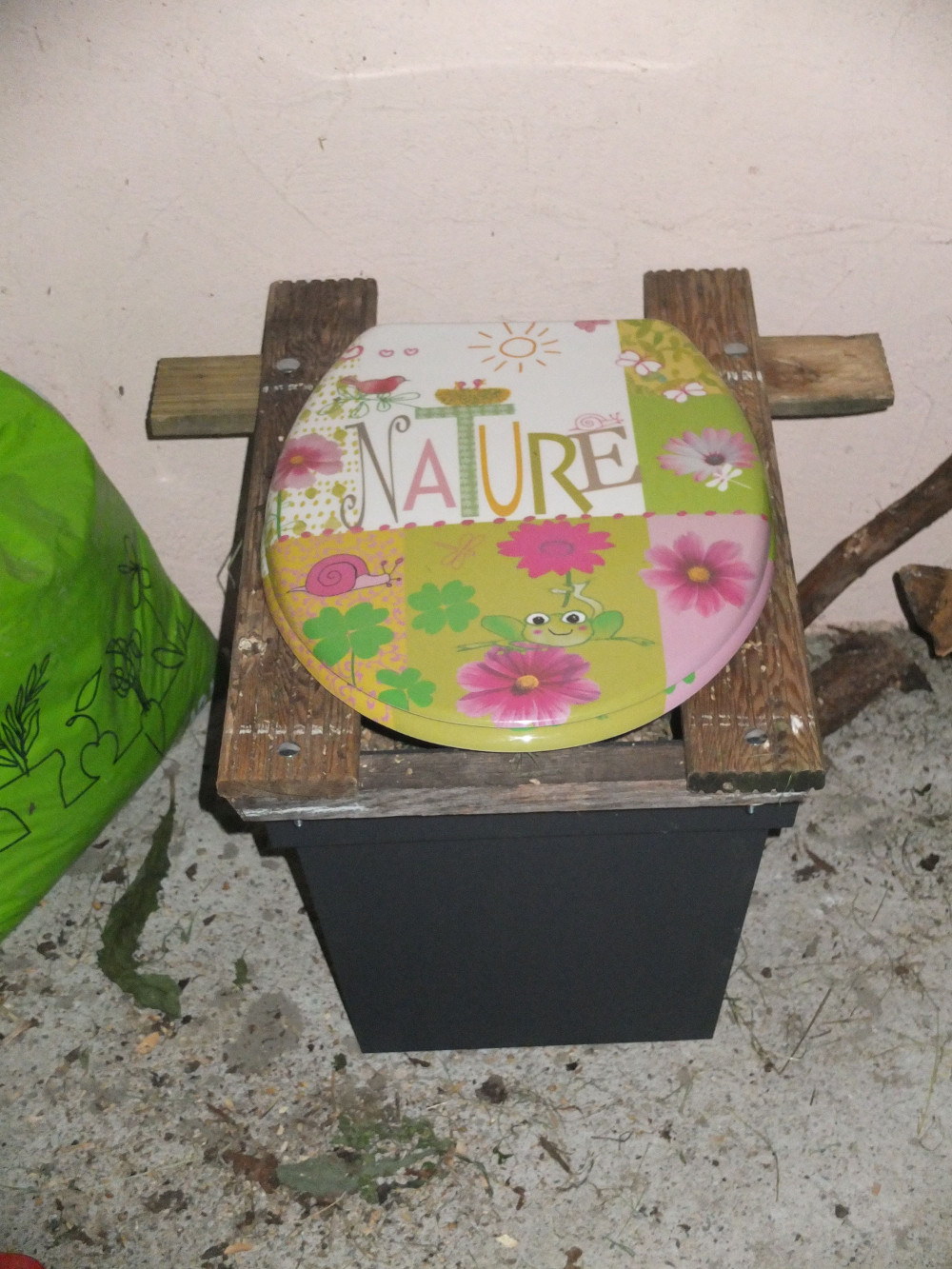 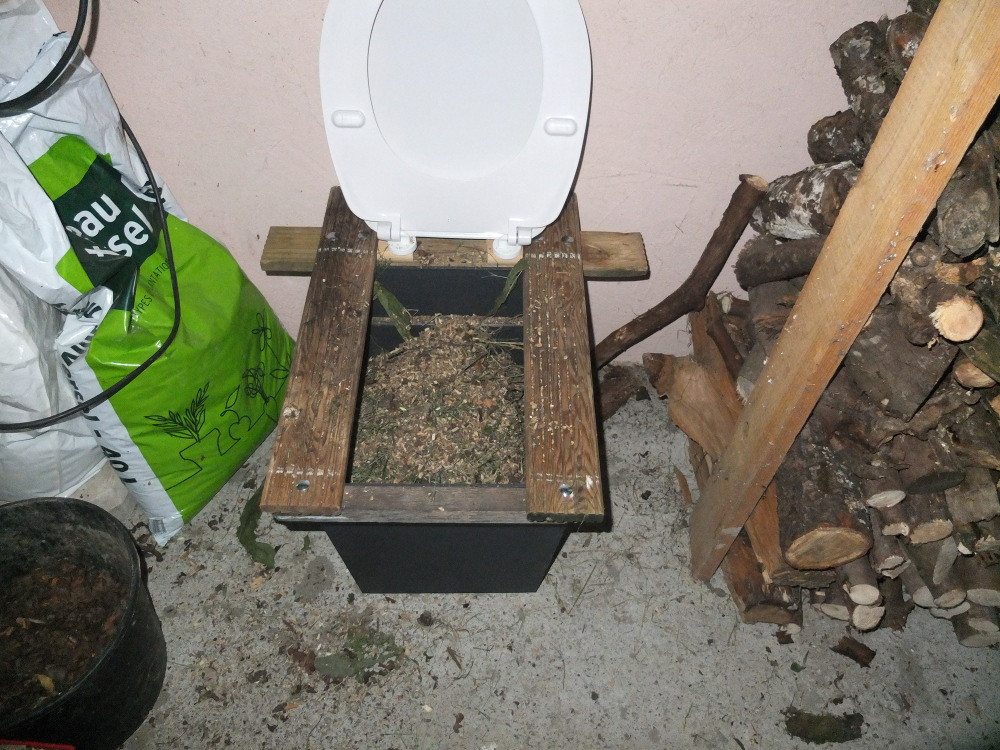 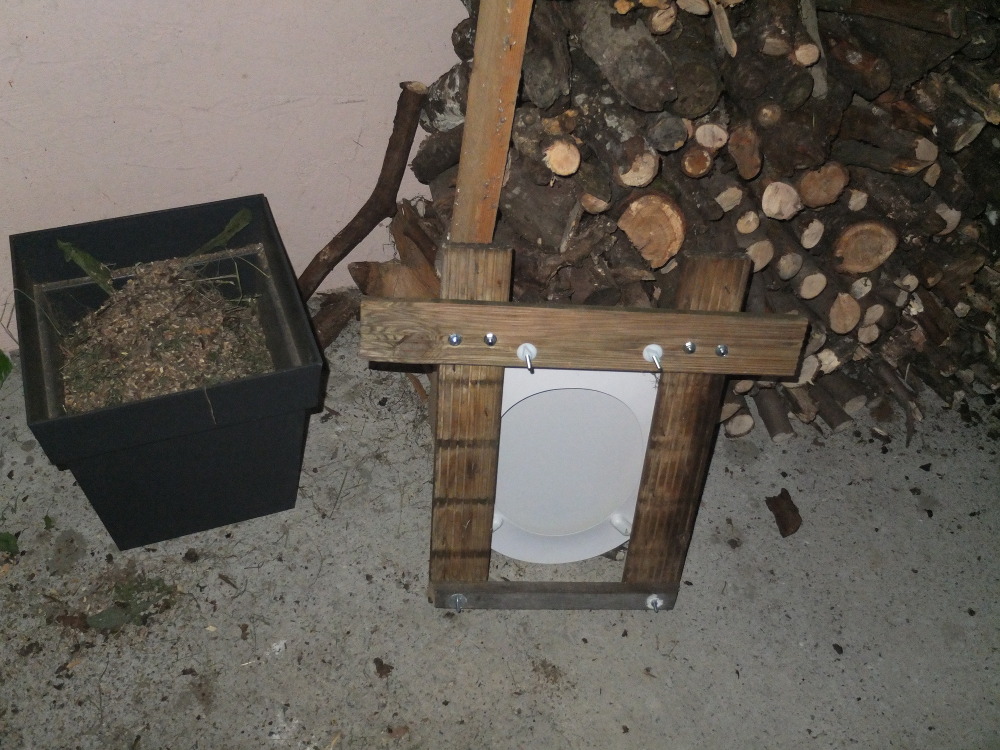 Edit1 So here is my conclusion for now:

After a while using the thing, I may add comments from experience:

Not the answer you're looking for? Browse other questions tagged composting toilet or ask your own question.

11
How can I build an effective rotary composter?
16
How can I manage a ton-per-month worm composting?
9
How to construct a composting toilet
5
How much liquid is produced when composting?
8
How to improve energy efficiency of composting toilet?
4
How will using leaves as toilet paper affect the composting of my toilet?
11
Can solid dog waste be safely added to a backyard composting heap?
5
Does Sawdust for Humanure/Composting Toilet need to be Powder?
7
Composting toilet v/s urine-diverting dry toilet (UDDT)