Is global population growth ignored in sustainable energy discussions because it makes any effort seem futile?

We (I'm in EU, Netherlands) are trying to reduce CO2 emissions, and many other regulations (nitrogen, pfas) have been devised to make sure we don't make our planet uninhabitable for humans.

But I don't hear many people talking about the pretty hard to miss elephant in the room: population growth.

I don't consider myself a pessimist, but I just don't see how this is going to work out, seems like something's got to give.

A few trends which help explain why population growth may not receive significant attention as part of climate change discussions (all charts from Our World in Data):

Per capita emissions rise with GDP 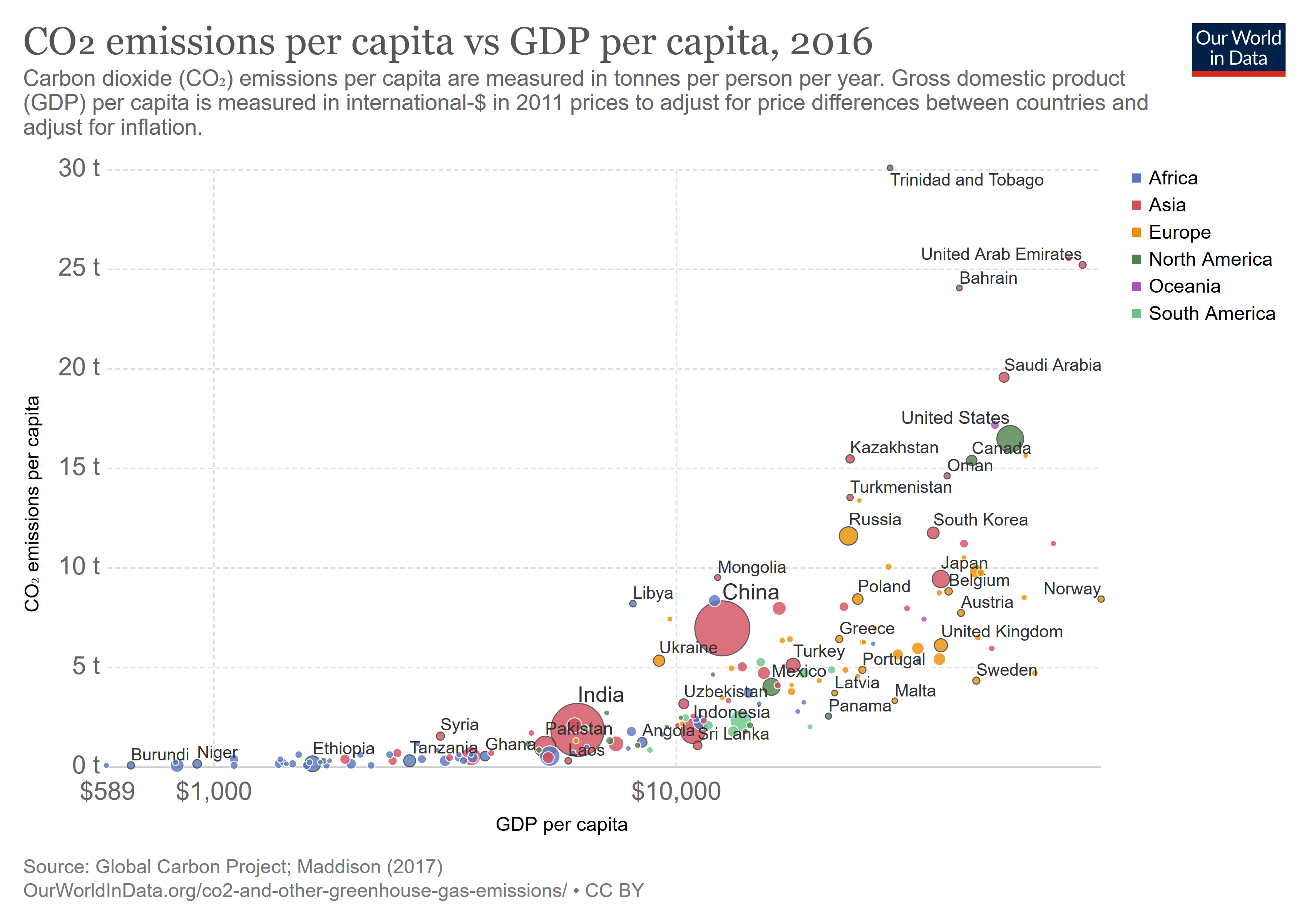 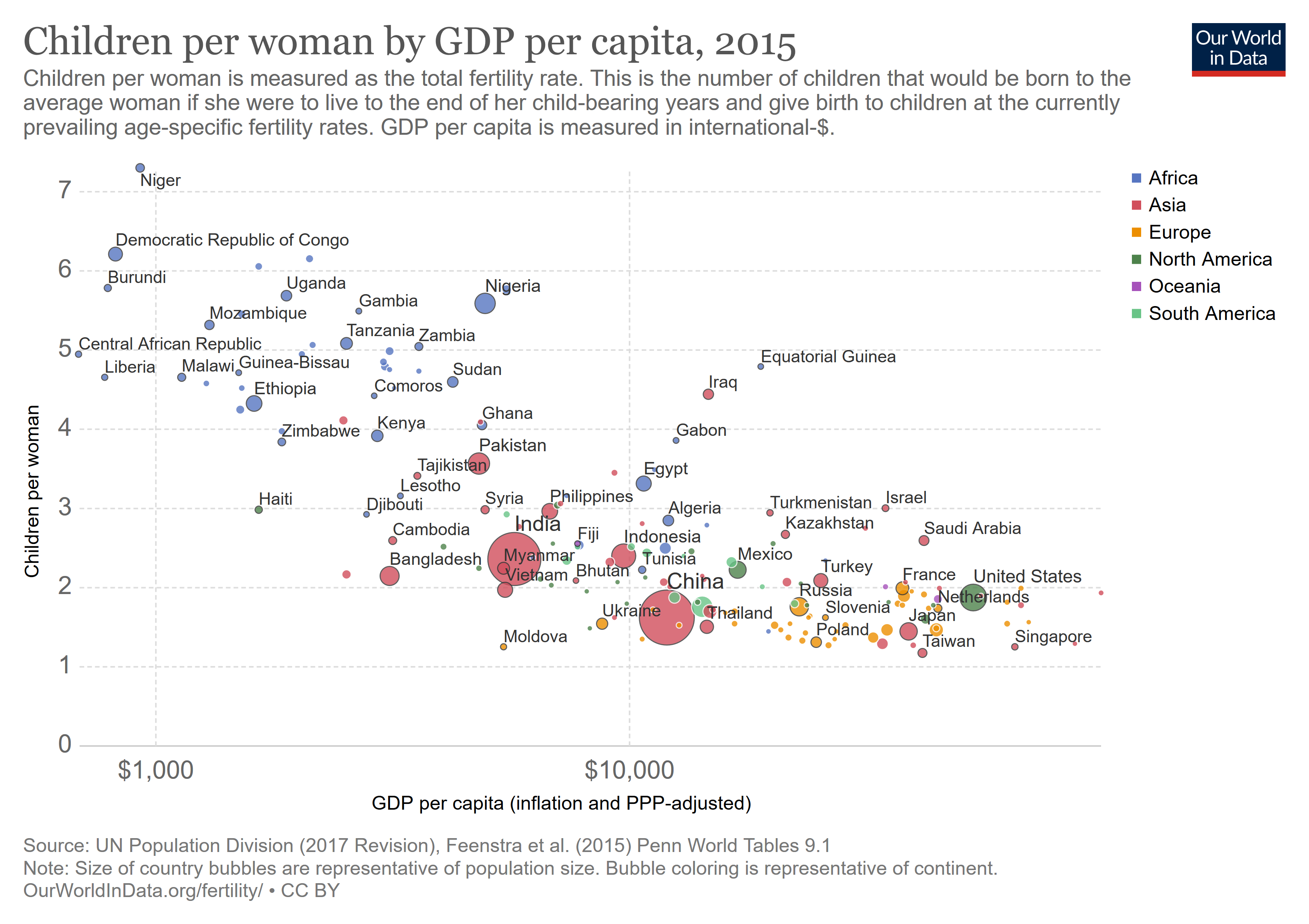 GDP per capita is rising around the world 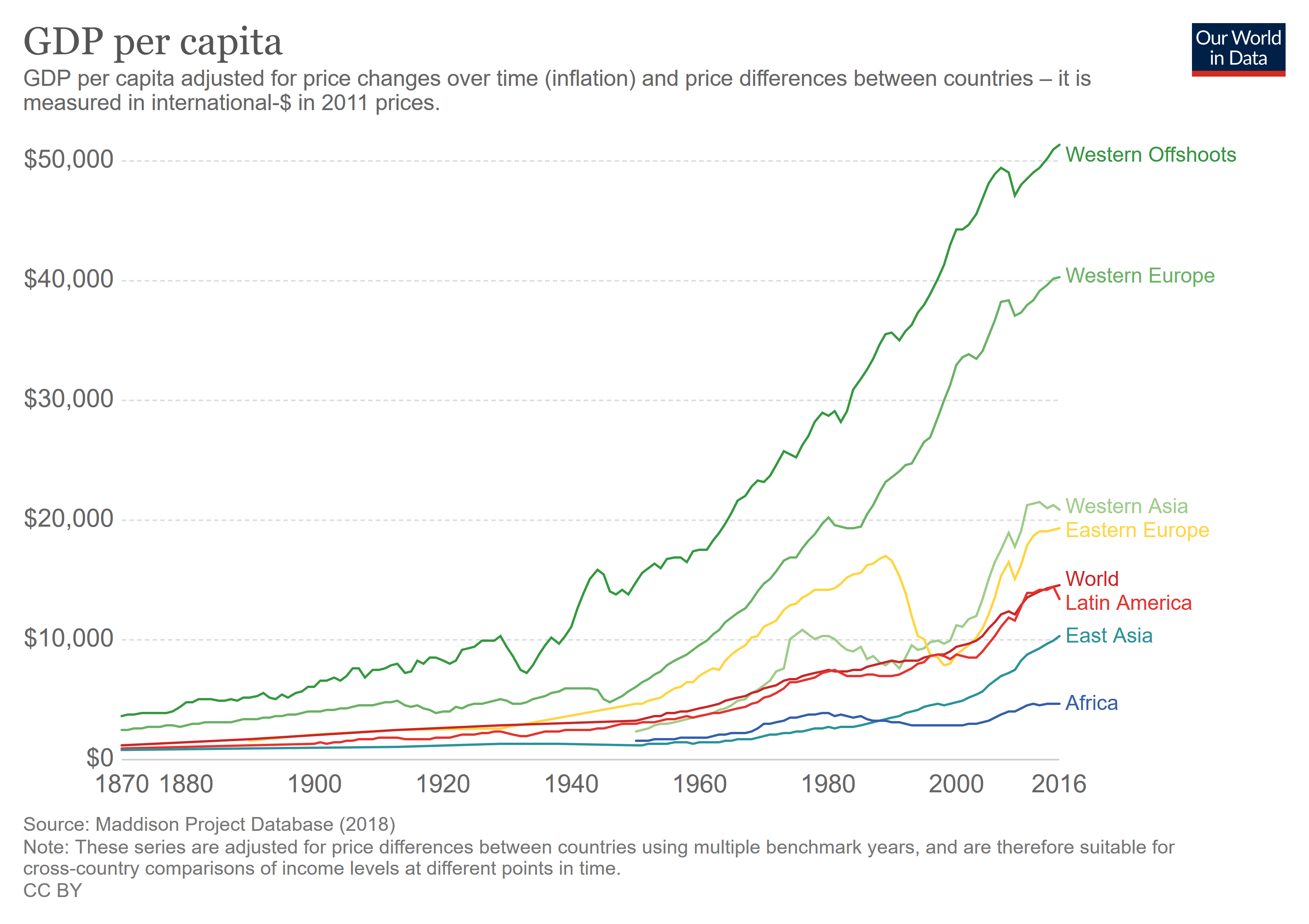 The conclusion from this data (whether correct or not) is that as the global economy grows, carbon intensity becomes a bigger problem, while population growth becomes less of a problem

Though it does not make the situation easier, population is not the elephant in the room when it comes to CO2 emissions: we might afford 10 billion with low lifestyles, but the habits of the less than 1 billion Western inhabitants on the planet already make the situation unmanageable. This is the elephant in the room.
10% of the population drives 50% of the impact (and things get worst as you concentrate on the richest percentiles).

So to answer your question directly: there is always a chance, but the people that most urgently need to change their habits are not necessarily the ones making more children...

Population control programs have always been controversial. Many compulsory sterilization programs have been implemented by various countries over time. China's now abandoned one child policy was decried around the world because of its social impacts.

One result of population control measures was female infanticide, which was also decried.

The other inadvertent population control is war. The estimated death total during World War 2 was 70 to 85 million, which was 3 percent of the world population of 1940.

Another issue about population control measures is they are mostly implemented/forced onto people of developing countries. Developing a policy that is equitable to everyone is going to be very difficult, because affected people will ask "why me, why not someone else".

Many population growth estimates actually suggest that the growth will slow down in the future.

The main arguments are that the global fertility rate is decreasing and that the median age of the world population is going up. 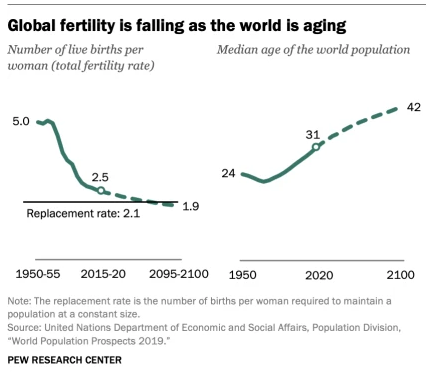 Reference: World population growth is expected to nearly stop by 2100

I think you already answered your question over there. What bad energy-related effects does population growth have if the energy is produced by solar panels? The answer is: none.

Some could say well you can't produce solar power at night, and supergrid is way too expensive to transport electricity from the other side of the Earth. That's true, but then again solar power can be stored as synthetic hydrogen, synthetic methane, synthetic methanol, even synthetic gasoline/diesel. No batteries required. No lithium / cobalt required.

Feeding the population with animal meat would of course be another question, but who says we must use animal meat? I have tasted a number of plant-based meat substitutes and they are pretty good nowadays.

The cost of solar is falling exponentially, too. Eventually, we reach the point where the solar panel is cheaper than the structure it is standing on! (Not considering the inverter; but then again solar PV can directly feed hydrogen-producing electrolysis cells with no inverter.)

Solar PV will revolutionize electricity production. We must find good uses for electricity that will be most of the time extremely cheap, sometimes even free. The only question here is how much time it takes until solar PV displaces coal. At that point, worldwide carbon dioxide emissions will essentially stop. So the cumulative emissions will be dependent on: (1) how quickly they grow in the meantime, (2) when will be the time they abruptly stop.

Yes, we have a very good chance. Climate change if gone wrong won't kill most of earth's human population in 50 years (it may have bad effects on a timescale of 100 years, though). Fortunately, the falling costs of solar power are going to give fossil fuels a hard time to compete.

Right now the largest threat may be the decline in insect counts worldwide. It could have bad effects on global food production. It is probably caused by too much land being used for agriculture.

You are right; having a child is by many orders of magnitude the largest CO2 source.

The reason this is not addressed currently is because, politicians still have all the power and will only do popular things. Population control is unpopular.

Therefore it doesn't and won't happen.

Sad isn't it......the planet can easily be saved, but because we leave the running of it to useless idiots...it won't be.😠

Not the answer you're looking for? Browse other questions tagged environmental-impact population or ask your own question.

14
What are ethical ways to curb the global human population increase?

2
How to use Maximum Sustainable Yield concept with given a given population, growth rate and carrying capacity?