Any way for microinverter PV array to power a house when the grid is down?

Suppose I'm already heavily invested in microinverter type solar panels -- with the inverter on the panel on the roof. These comply with UL 1741 and will stop supplying power the moment they see grid power disappear (referred to as anti-islanding protection).

However, I now realize I want my house to have limited "off-grid" capabilities -- I want to use my PV array to charge a battery during a grid outage. I'm ready to go with a hefty subpanel for those loads with a proper interlock for utility vs inverter, which is powered from a large battery bank. That's all taken care of and working.

Further, the solar panels feed into another subpanel, with another interlock. This one interlocks "utility" and "???? potential future thing here", so that when I throw that panel over, the solar panels are positively disconnected from the grid and attached to "????". The battery charger for the large battery banks is also in this subpanel.

I've tried to set the stage as best I can. I can throw a switch to disconnect my system from the utility, and connect "????" to my inverters.

Now, the $10,000 question. Is there any tech available that will allow me to get these "microinverter" panels to come up, despite the grid being absent, and generate 120 VAC (since that's what they do), so I can use them to charge the battery and power my house?

tl;dr: Because of how the grid and your inverters work, it's unlikely that there is a solution for your current system. You will either need to set up a communication network with your microinverters and another device, or you will need to set up an ac-coupled system with a centralized battery charger, inverter, and grid disconnect. This will probably require you to replace your microinverters.

It sounds like your (hypothetical?) system currently looks like this (dashed lines for ac, solid for dc):

I gather you're imagining that "????" is some sort of device that would provide an AC signal to "fool" the inverters into thinking they're seeing an ac signal, so they could generate power even with the actual grid signal.

The problem -- you have utility-interactive inverters

Not only are your inverters required by UL 1741 to stop supplying power when the grid signal disappears, they are technically unable to do otherwise. When there's an outage, they wouldn't all detect this simultaneously -- so at least one should continue producing 60 Hz -- in theory, this should be enough to provide a 60 Hz signal for the rest. So why doesn't it work?

The grid provides a "stiff" signal. Short of substations, power plants, or large industrial facilities going offline, load and supply changes will not move the frequency by much. This is fundamental to the droop control algorithm that governs the grid. A large or fast shift in the frequency indicates that an outage is imminent, because the grid is moving outside of the range under which droop control can balances loads and sources.

Utility-interactive inverters (also known as grid-tie or grid following) use phase-locked loop (PLL) control to match the frequency and phase of their output signal to what they detect on the grid. In doing this they also affect the grid, but these changes are barely perceptible (ripples in an ocean). But if the grid is absent, the changes that each inverter implements would have a greater effect (ripples in a teacup), causing cascading fluctuations on the inverter network, which feeds back to the input of each inverter. As the changes amplify, the PLL will become unstable and the inverter will shut down. The UL 1741 limits* are programmed to shut the inverters down before they reach this technical limit, but either way, if the input ac signal starts fluctuating too quickly, the inverters will shut down.

There are two potential solutions to this problem, but either one may require new microinverters.

Solution one: Standalone inverters with communication

Standalone or off-grid inverters (that you'd use for a camper, boat, or remote cabin) develop and sustain their own 60 Hz signal. There's a chance you could install a single standalone inverter in your system (perhaps at the ???? location, drawing off the battery bank), and the utility-interactive inverters would be fooled into following it.

However, there are two potential issues:

One way around these problems is with a communication interface between inverters. You would need to check the specification of your microinverters to see if they support this, and what other products they could work with. Unfortunately, these systems are not yet standardized, so you may have trouble finding something that works.

The Sunny Island inverter from SMA is an example of a standalone inverter that can do this with other SMA inverters. You can see the communication interface in the diagram below: 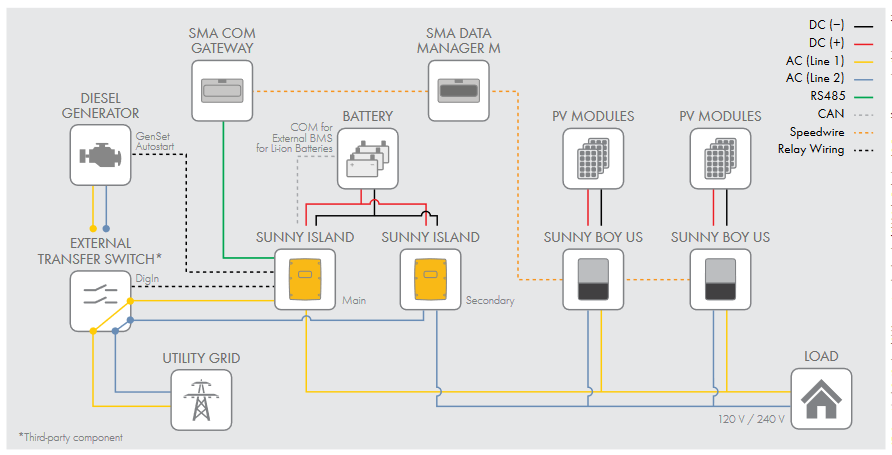 Solution two: an ac-coupled system with a grid-forming multimode inverter

Another option is to re-wire your system as an ac-coupled system, which centralizes the inverter, charger, and grid disconnect, eliminating the need for a communication interface: 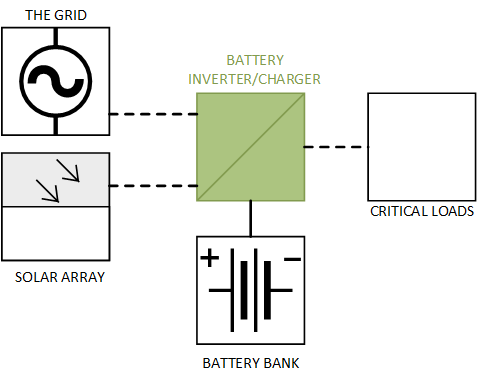 In this case, you would utilize a battery inverter/charger that is designed specifically for this application. (Schneider electric and Outback Power are the first two I found where I could easily confirm they work in this fashion, but there are probably many others.)

These inverters are called grid forming because they create a stiff enough signal to provide support for grid following inverters. Multimode refers to their ability to be utility-interactive when connected to the grid, and standalone otherwise.

In this solution, the inverter/charger can draw from the grid, the batteries, or the solar array, and supply power to the loads, or back to the grid. When the UL 1741 limits kick in, it disconnects from the grid, but continues drawing power from the PV array or the batteries to supply load. It is designed to produce an ac signal sufficient to operate grid-tied inverters, as long as they're rated to operate in an ac-coupled system (meaning their voltage output is limited).

Some inverter/chargers can handle the grid disconnect/reconnect seamlessly, and essentially constitute a microgrid -- with others, there may be a slight delay before they continue supplying loads, and are more like hybrid solar/backup power systems.

Some microinverters (like Enphase) are specifically rated for ac-coupled systems, but may still require some communication hardware to make this work.

Some resources I found helpful when pulling all of this together:

*I don't have UL1741 handy, but the limits are defined in IEEE 1547-2018 These ranges are default settings -- there are situations where an inverter can stay connected outside of these ranges, depending on utility interconnect agreements:

Not the answer you're looking for? Browse other questions tagged solar-power electricity or ask your own question.

5
How much energy costs do portable solar panels save in a house?
5
Which battery is best for solar power?
4
Two solar regulators to one battery bank?
6
PV and Battery circuitry for DIY off-grid solar power
6
Size and reliability of inverter for refrigerator in an off-grid tiny home
4
Cost-effective way to solar charge proprietary LiPo tool packs having AC chargers
4
Can a solar inverter still work without batteries? (off-grid)