Low-cost solar energy alternatives to power a single appliance in an apartment?

I'm searching for information on solar energy alternatives that are accessible to people like me without having to break the budget. For example, I live in an apartment with a rooftop, and I want to use solar energy for one appliance (ie. the refrigerator). What small-scale alternatives are there for things like that? Or maybe I just want to just power my A/C. Are these options available?

Considering that I live in the tropics where we get very hot sun throughout the year, and that electricity here is very expensive, I believe there are many of people interested in implementing solar energy alternatives in their homes. But most are put-off when the cost hovers into the thousands.

An idea of a solar-energy alternative that I would be interested in: maybe finding a solution where I can connect one appliance without spending a fortune.

We don't get any help from the government for moving to other alternatives of energy. The only benefit is a lower monthly bill.

If you don't have that refrigerator yet and you are a small household, consider what they sometimes have in camping vans. They put a solar panel on the roof and use it to top up a normal 12 volt car battery. This is then used to run a little 12 volt camping refrigerator.

If your needs are small then this is a cheap and mobile way to solve your problem.

Something I've been experimenting with for lighting is called the "Alum Battery" (a good search phrase for youtube or google). If you can find a cheap enough source of aluminum sulfate, you can actually take a battery that will no longer start your car, lawn tractor, motor cylce etc. and convert it to a different kind of battery by replacing the Acid with pickling alum (or equiv.). I won't go into details about doing that, but you can find videos and other DIY's. I recommend you watch as many as you can find though to make sure you learn how to do it safely. Some of the videos show some pretty unsafe practices.

Anyway, I have made about a half a dozen or so of these Alum batteries and with a small (15 to 30 watt) solar panel I can run a 40 watt equiv. DC bulb from dusk until dawn every day. Even in Michigan winters. As far as appliances, I haven't gotten that far in my experiments yet, but I've noticed that my small chest freezer only uses about 90 watts of AC. The problem is that translates to much higher power when converting from AC to DC and the need for an inverter. Unfortunately these batteries don't usually work very well with an inverter because they seldom hold a full 12 volts, and inverters stop drawing at about 11 volts.

My alum batteries range from about 7 volts to about 11 1/2 volts fully charged. I design most of my LED lighting circuits accordingly. The ones that hold 8 volts or more will run some 12 volt DC LED bulbs until the voltage drops to about 7 volts or so. I have one lawn tractor battery (converted) that holds 11 1/2 volts and when I first converted it and after I formed it, I ran a 5 watt (40 watt equiv) DC bulb 24/7 for two weeks on it. The second week the bulb grew pretty dim. After two weeks when I disconnected it, it was still glowing. So there is a lot of potential for these batteries IF you can get the alum cheap enough. Ordering 99.5% Aluminum sulfate on ebay I've got my cost down to about $4(US) for a typical lawn tractor battery and about $8(US) for a typical car battery. The formula I use is 2 cups aluminum sulfate to a gallon of distilled (or rain) water.

The higher the quality battery produces the better the conversion results. If they don't hold ANY voltage I would advise not to waste your time converting them. I have a couple of batteries that I went ahead and converted that only produce about 3 or 4 volts. The lower voltage batteries were real junk before I converted them. If you have one that doesn't start your car good enough any more but still holds around 12 volts you will probably have better results. Obviously deep cycle batteries have better plates so they will usually work the best. I'm going to try to use one of those 3 to 4 volt conversions for a scarecrow idea I have to chase off critters using a wolf halloween mask and low watt led bulbs to light up the eyes. Other than that those two batteries don't have much value. The ones that came out to six or more volts are very useful for small dc lights. Eventually I plan to have a light in every room of my house run by these batteries and to use them every day.

I used brand name alum from the local grocery store for my first two conversions, but it was costing me about $30 to convert one car battery (too much imo). I should mention that they say these batteries will last ten or fifteen years. You can run them completely dead and not harm them. Sitting on the shelf they say they will run down faster than acid, but they'll charge back up a couple years later. I tend to think it's better to use them on a regular or semi-regular basis, but I have no data to support that.

I do have one battery that was a dried up old deep cycle off the front of an old camper I bought that I've been using for about 3 years to light three "Mighty Lights" (as seen on TV) and that battery is still going strong. I use two 1 watt hobby solar panels to charge it. No solar charge regulator is needed because the wattage is so low. I just have a diode to stop back flow and it's hooked straight to the battery. And the lights are also hooked straight to the battery. They have both light and motion switches built in and each have only 2 led's. They work well for navigation during power failures. If I install it in my house I'll be sure to include a low amp fuse for safety.

They do off gas like a lead acid, but very little, especially with these low draw lights I'm using. While they do contain some acid, they are quite safe compared to lead acid from what I've heard from the experts on Youtube. I leave it to you to research how to convert one if you decide to experiment.

I have an FB group that I'm starting about alt energy. Eventually I plan to put some of the data from my research on the lead alum battery on there, and if someone is interested in seeing some of that it will motivate me to do it sooner. Here's the link if you're interested:

You would need to set up a small solar system with a charge controller, batteries for energy storage, AC inverter, and panels of course. I've added an image below. You would just have to make sure you have enough solar to generate the needed wattage that you need to run something bigger like and A/C or refrigerator. 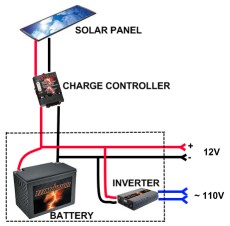 I stay in Malaysia, our weather here is either rain or just plain hot. Same as you, solar solutions here ain't cheap either.

Here are some affordable tips I can offer you:

Not the answer you're looking for? Browse other questions tagged solar-power photovoltaics apartment or ask your own question.

32
Which solar power technology has the highest energy return on investment (EROI aka EROEI)?
12
Options to suggest to landlord for cost savings via renewable energy?
9
Are there types of solar panels that can be made completely locally and independent of fossil fuels?
8
Can we build a very effective cooling system for house or apartment using solar or wind power?
8
Can solar energy be too focused onto a solar cell?
4
Apply solar energy solutions at our apartment?
2
How to work around a supposed Huawei SUN2000L-5KTL inverter throttling issue
4
Cost-effective way to solar charge proprietary LiPo tool packs having AC chargers