Can hot air move horizontally without a fan (vertical is easy)

Passive solar thermal, taking cool air at bottom and hot air out at top is easy. But can the same 'hot air rising' system be made to work horizontally. IE long black tube on a narrowboat

Any ideas other than a fan ?

Buoyancy acts vertically, so in most circumstances the answer is "no" (or at least "not with any level of efficiency that would make it worth doing"). If you don't care about efficiency (or aesthetics), and are so hard-pressed for heat that you're prepared to invest significant amounts of time/money/energy for meagre returns, then there are a few edge cases that can be explored.

1) Slope. Perfectly level pipes generate negligible draft (only a tiny bit at the ends). However air is a fluid and, being a fluid, it only requires a very small slope to get it to naturally flow. Slope a rigid pipe as little as 1-in-100 and you'll be surprised how much warm air flows out of the higher end.

2) Friction. The thing that retards airflow within a pipe is primarily the friction between the inner walls of the pipe and the air molecules next to it. A pipe with very smooth inner walls will reduce friction and maximise airflow. Rough — especially corrugated — pipes should be avoided.

3) Vertical pumps. On something like a narrowboat, it's easy to fit a long pipe horizontally at roof level on the side, paint it black, and have that heat the air inside the pipe. To pump that heat into the cabin, you can have a single vertical section on one end — the inlet end — that goes down the wall, through the deck/wall and to floor level in the cabin. The vertical section that is external and exposed can be painted black and enclosed in a mini greenhouse (an offset, semi-circular shroud made of transparent plastic that reduces convection losses). This single, short vertical section can easily generate enough buoyancy on the inlet side to merrily pump out a horizontal pipe 10x its own length — especially if you minimise friction on the horizontal section. Basically, instead of the entire pipe being responsible for both heating and pumping the air, you separate the functions and dedicate long horizontal sections for heating and short vertical sections for pumping.

4) Internal auger. If you study the airflow within a pipe that is exposed to the sun on one side, you'll notice that the internal air rises on the side exposed to the sun and falls on the side in the shade. This motion is normally useless as it is generated along the cross-section of the pipe, not along its length. However, if you insert something like a plastic auger inside the pipe, then the shape of the auger itself forces both rising and falling air molecules to head in the same direction... inducing a slow but steady longitudinal airflow within the pipe. 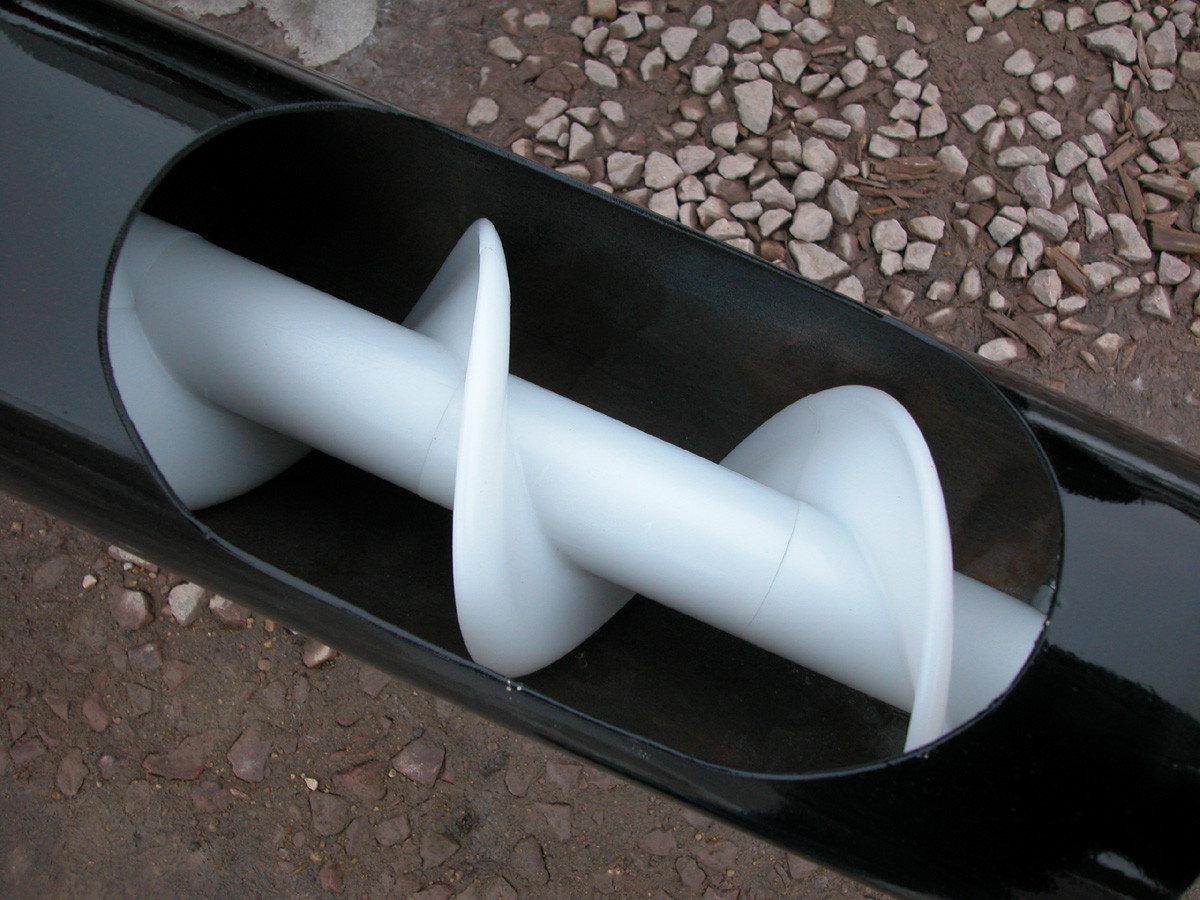 Note that this sort of approach functions optimally when the sun is low in the sky — winter / mornings / high latitudes. Its performance degrades rapidly as the sun gets higher in the sky.

The easiest way to create the auger is to print interlocking sections on a 3D printer.

5) Suction chimney. Install a flue/chimney in your cabin. Paint the exposed, external section black. Insulate the internal section and have it extend all of the way to the floor. When the sun shines the exposed section will heat up and create buoyancy at the top of the chimney. This will suck cold air from the floor of the cabin up and out. Assuming your cabin is relatively-well sealed this will turn the cabin into a low-pressure zone. Now install a horizontal pipe near the roof on the sunny side and use it to neutralise the pressure and act as a warm air inlet at the same time. Essentially, this is just a variant of 3) above, however, you can install more than one suction chimney to increase the airflow and have a lot of flexibility with regards to placement (toilet compartment — I'm looking at you). You also have the option of a single, long, folding external chimney that can be mounted on the roof of the cabin, raised/lowered as desired and which would simply look like a "mast" to the casual observer — which is perhaps more aesthetically acceptable (especially if you use it to fly some sort of flag).

Like I said, all edge cases — but, if you really, really need the heat, then they may be worth considering.

I've omitted lateral moving solutions (e.g. folding outriggers) because I don't see them being particularly practical on a canal with walking paths along the edges.

Not the answer you're looking for? Browse other questions tagged solar-power heating solar-thermal or ask your own question.

32
Which solar power technology has the highest energy return on investment (EROI aka EROEI)?
10
How to measure the energy output of a thermal solar hot water system?
10
Is building vertically instead of horizontally in climate with large seasonal temperature changes more sustainable?
8
How to improve energy efficiency of composting toilet?
8
Can we build a very effective cooling system for house or apartment using solar or wind power?
9
Failed "solar thermal" water heating system
2
When/where is it feasible to use a solar cooker to boil water?
2
What is the most sustainable choice for a domestic hot water system in temperate, coastal Australia?